is certainly a household name in New York. Her talents go beyond the commercial and residential real estate business. Years of hard work, dedication, and passion help put her at the top.

MaryAnne always set the bar high for herself, graduating summa cum laude from Fordham University, where she also earned her master’s degree. Not long after graduating she began her career as a New York City Urban Fellow working at the Public Development Corporation. In 1994, MaryAnne began what would prosper into an extremely successful journey at Forest City Ratner Companies. MaryAnne began at Forest City Ratner by building new buildings in Brooklyn. Although development in Brooklyn was considered high risk, she was drawn in to the challenge. Developing in Brooklyn gave her the opportunity to hone her skills, because nothing was handed on a silver platter in Brooklyn. MaryAnne mentions how the work was gratifying, and Forest City worked themselves to being able to put up buildings every 12-18 months in Brooklyn. The commitment MaryAnne had while building in Brooklyn set the tone for the future of her career. 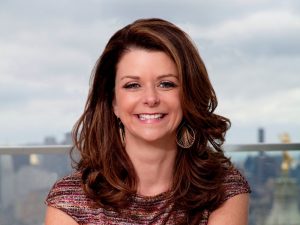 While at Forest City Ratner, MaryAnne held the titles of President and CEO. Her major breakout transaction was leading the chase and execution of the New York Times headquarters deal. Some of her outstanding deals that followed also include leading the efforts to build the Barclays Center, the Tata Innovation Center at Cornell Tech, and New York by Gehry. These are just a few of the career-changing transactions MaryAnne led while at Forest City Ratner that attributes to the name she’s made for herself in the industry.

Eventually, Forest City Ratner become a REIT, which put MaryAnne at a crossroad. She decided she still wanted to pursue her passion of building ground-up in places like New York. MaryAnne informed colleagues she would be leaving and in 2018 she formed L&L MAG with David Levinson and Robert Lapidus. Not only was MaryAnne able to continue pursuing her passion of building gorgeous buildings and exploring new types of projects, she was also able to assemble a talented team to help bring the company to success.

With such accomplishments under her belt, it’s no surprise MaryAnne has won numerous awards including the Bernard H. Mendik Lifetime Leadership Real Estate Award in 2017. Since 2013, she has also been on the Commercial Observer’s Power 100 list each year. Outside of the New York real estate industry, MaryAnne has also played a hand in the art and communications scenes. She has held memberships within the Executive Committee of The Brooklyn Academy of Music, Vice-Chair of New York Public Radio, and has served as Chair Emeritus of the Board of the Downtown Brooklyn Partnership.