has made a significant impact in real estate. Having one of the largest real estate companies in the United States is one of her many accomplishments. Her extensive portfolio was made possible through years of focus, passion, and commitment to her craft.

Helen graduated from Georgian Court University in New Jersey. She was a teacher at a private school in Pittsburgh for a limited time, but in 1975 she decided to join her family business. The family business was a brokerage company her parents started in 1957, and this was the start to an incredible career for Helen. When Helen joined, there was still an abundance of room for the company to grow, and she helped pave the way. 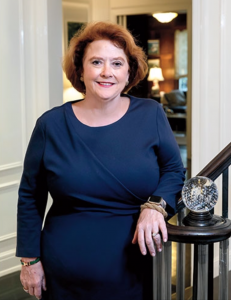 What is now known as Howard Hanna Real Estate Services is much bigger than she could’ve ever imagined. Following in her parents footsteps, she was able to grow the company so largely without the help of any private investors. Part of what makes her company so successful is the precise selection of companies she chooses to merge with. She places an emphasis on prospective companies mixing well with her business. “A similarity of culture must be present, which leads to synergy in the marketplace”.

This company has three generations of the Hanna family involved in daily operations. What began as just two parents running the business has grown to over 11,000 employees and over 320 offices in various states. One of the many goals the company has achieved was a record setting 112,448 closed transaction sides in 2018.

Some of Helen’s personal achievements include being named by INMAN News’ 100 Most Influential People in Real Estate list and earning the 2019 Women of Influence Career Achievement Award from the Pittsburgh Business Times. With the incredible achievements Helen has made, it may seem impossible that she has time for anything else. But in fact, she and her husband have also produced eight Broadway shows. A woman of many talents!